What would become the Athens, Ga., band’s debut release started, for all intents and purposes, as a solo record from singer/guitarist Charlie Garrett. But soon after the sessions with producer Kalen Nash of New West Records band Ponderosa, Garrett assembled an impressive group of musicians to perform the album live—drummer Darren Dodd (Butch Walker, Ponderosa), keyboardist John Watkins (Dead Confederate, St. Pe) and singer/bassist Corinne Lee (Snowden). “From the first show we played together,” Garrett says, “I realized pretty quickly that this was going to be a band, and not just some dude playing acoustic guitar with a bunch of hired guns.”

The making of Limbs (out Oct. 9) and the emergence of Houston in the Blind represent a phoenix-style rebirth for Garrett, who after more than a decade paying his dues on the bar-band circuit finally allowed the music he was creating to catch up with his muse. “I found myself with a batch of songs that were very different from anything I’d written before,” he says. “I’d been playing for years, and even though I’d grown as a person, I was still playing the kind of music I was listening to at 15 years old. It just didn’t reflect where I was at in my life. So I had to rethink everything. I wanted to challenge myself.”

No longer caring whether he pleased the drunken college-town barroom crowd, Garrett began creating songs for himself and his own enjoyment, enlisting longtime friend Nash to help him make sense of the bold new music he was writing. “Kalen and I have actually known each other since kindergarten,” Garrett says, “so there was a lot of trust there. He took a hatchet to the songs—chopped them all up. I can’t say enough about what an amazing job he did steering the ship.”

The initial sessions for Limbs took place in August 2013. Between Garrett and Nash, they had enough studio gear to put together a mobile rig, and spent a week recording at Athens venue Normaltown Hall. There, they tracked three songs—“I Will Chase Your Ghost,” “Who Are You” and “Fire.” “From the beginning with this record, there was a mood and a vibe,” Garrett says. “We treated it like we were painting. We weren’t trying to chase perfection—the approach was, ‘Let’s do first takes on everything. No punch-ins. Just do a take—if it’s not good enough, we’ll do another.’”

After making significant progress that first week, the record had to be shelved for several months while Nash and Ponderosa hit the road for a tour with Washed Out. But the time off was a blessing in disguise. “Honestly, I was relieved,” Garrett says. “Working with Kalen, he’d raised the bar so much that I was inspired. The break gave me time to figure some things out and work up some stronger songs. I tried to write from a place of life experience. Most of the record deals in some way with human relationships—not just romantic, but also family and friends.”

The sessions for Limbs resumed in Feb. 2014 at Southern Tracks studio in Atlanta, where Nash’s buddy Dodd laid down the record’s unfaltering drumbeats and studio co-owner Ben Holst added a silver lining to the cloudy, melancholic tracks with some gorgeously ethereal pedal steel. From there, they moved operations to the more casual environs of Nash’s house, just outside of Athens in Winterville, where they finished the remaining six songs. Nash’s wife Aslyn—also an accomplished musician—added keyboard and piano parts to flesh things out.

“I enjoyed making this record so much,” Garrett says. “For the first time in my life, I was bummed out when the sessions were over. I’ve never been around such a positive vibe in the studio. The whole process pushed me and helped me tear down the musical walls I’d built around myself.”

While Garrett has made records in the past, for him, Limbs feels like the first that really matters. It’s a record not about roots but extremities; about growth and expanding outward to reach new territory. And Houston in the Blind is every bit as fitting a moniker as the album title. A NASA term suggested by keyboardist Watkins, it evokes a vibe that’s of a piece with songs like “All My Love,” which while asking the question, “Are you a memory or a dream?” plays like the swirling soundtrack to an astronaut drifting into tranquil oblivion after her lifeline snaps on an ill-fated spacewalk. But Houston in the Blind works on a more personal level here, too. “It’s a message to Mission Control that you’ve lost your bearings,” Garrett explains, “that you don’t know what you’re doing or where you are. Right after I’d finished the new record, that’s exactly how I felt. And we’ve decided to forge on as a band, not knowing the answers and just figuring things out as we go.”

Now, with Limbs scheduled for an Oct. 9 release, and Houston in the Blind’s new lineup functioning tightly as a unit, they’re already thinking ahead to the next record. “It’s no longer this solo type thing with a primary singer and songwriter,” Garrett says. “Corinne writes and sings now, too. Darren has been coming up with guitar loops for me to write to. It’s just really cool to have three people in the band who collaborate so well together. The first record isn’t even out, and we’ve already got an album’s worth of new songs. Recording them is definitely on the horizon for us.” 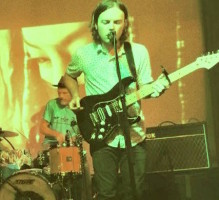 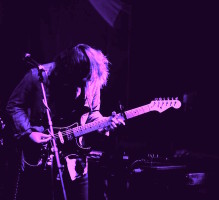