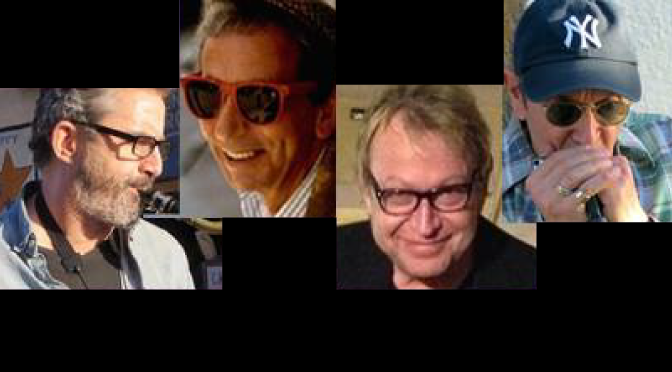 The Elegant Strangers formed spontaneously at the Westminster Corridor of Venice, CA. This is an area where some of the most gifted artists and musicians come to grab a cup of coffee and some conversation. The band is a bit of a mutation of the erstwhile Venice Roasters, keeping up their tradition of “roasting” (putting an upbeat, two-step tempo) to classic pop and rock music.

The band formed quite organically. Vinnie Caggiano has a habit of bringing his guitar over to Groundworks Coffeehouse to casually play. There, he met Stanley Behrens and they began jamming together. Before long, Stan introduced Rob Mullins into the mix, inviting him to jam with the group at Danny’s Venice. Alongside this, there is Matthew DeMerritt, who was a member of the defunct Venice Roasters.

The entire band consists of Vinnie Caggiano, guitar; Matthew Demerritt, tenor and alto sax; Stanley Behrens, harmonica, flute and tenor sax; and Rob Mullins who plays both keyboards and drums simultaneously. Rob is both the bass player (played on keys) and the drummer of the group.

The Elegant Strangers on Radio Venice

One thought on “The Elegant Strangers”