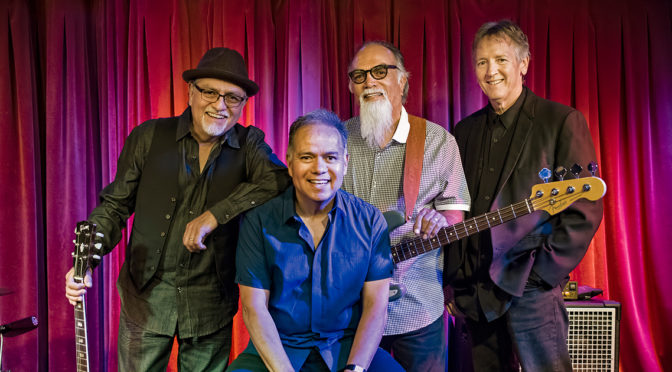 The Delgado Brothers’ iconic brand of original song crafting is fueled by rock solid musicianship. The Brothers’ music has long been embraced both locally and globally by a wide spectrum of people undivided by culture, age or socioeconomic status.

Propelled by their 2016 INTERNATIONAL BLUES COMPETITION WIN in Memphis, TN, the Delgado Brothers are a well-known name throughout Southern California and have been special features in the Ventura County Blues Society’s Blues festivals as well as the 40th Anniversary of Santa Barbara’s Blues Society concert. Hailing from East Los Angeles, The Delgado Brothers have longtime been referred to as Los Angeles’ best kept secret. So just who are these quintessential musicians?

For over 30 years Blues, Roots Rock, and a culture of social awareness has made the Delgado Brothers band an ever-evolving experience, always reflecting the human condition. All of this life experience may explain their flare for illuminating everyman’s joys, sorrows, triumphs and losses. Driven by fierce independence, unified by family, and fortified by the brotherhood of music, the Delgado Brothers deliver the musical goods; topical anthem-worthy songs complemented by call-to-action lyrics, and East L.A. Soul. The Delgado Brothers’ latest album, TWO TRAINS (2018), may be the most dynamic and soulful work of their recording career. Their previous 3 albums, Let’s Get Back, A Brothers Dream, and Learn to Fly have received critical acclaim.

The Delgado Brothers on Radio Venice