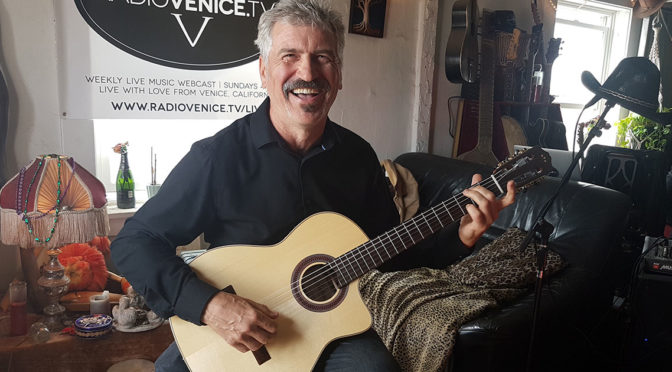 Bio
In the spring of 1981, Boston drove himself to Los Angeles from Alberta, Edmonton with the LA music scene in his sights. Back home in Canada he played and studied guitar into college. His first year in LA he studied at the newly formed GIT (now MI). By his second year he was teaching at that same institute.

The ‘Michaud’ family of Rick’s mother brought live music and song to family gatherings and so Rick’s early exposure to instruments included the guitar, bass, mandolin and fiddle.

Those early experiences born of musical gatherings honed Rick’s dedication to music and would pay off in 1988 when Belinda Carlisle recruited him for guitar duties on her 1988 world tour, Heaven is a Place On Earth. Rick ended each night soloing on stage with Belinda and his acoustic guild D50.

When word got out, it was T Bone Burnett who took notice and invited Rick on tour with then wife Sam Phillips to open for Elvis Costello. The trio played throughout Europe. About Rick, T-Bone was fond of saying, “Thank God for sending me a guitar player who can fingerpick!”.

A meeting with Lowen & Navarro (Dan Navarro and Eric Lowen) formed a songwriting partnership with Boston and led to the band Twenty Times and the album Walking On A Wire. With Nick Gilder, Boston wrote ‘You Know It’s Gonna Hurt’ for Joe Cocker and his One Night of Sin album.

More work followed, including the song, ‘A Face In The Window’ with producer Nile Rogers for his ‘B Movie Matinee’ solo album.

Through Jim Goodwin of The Call, Boston met Gang of Four Bassist, Dave Allen, leading to collaboration on the production and release of Low Pop Suicide. Allen and Boston launched World Domination Records and went on to produce albums for a string of bands including Sky Cries Mary, from Seattle. It was during this period, when Allen/Boston were composing the score for ‘The Harvest’, a David Marconi film, that Rick was able to work again with Belinda Carlisle when he invited her to sing a duet with him on a song for the film. The soundtrack for the film is titled, The Crash Baptists.

In 2000, Rickie Lee Jones was in the audience when Rick was playing LA folk club Tula’s Porch with Angela McCluskey and Paul Cantelon of the Wild Colonials. Rickie invited Rick to be her guitar player and band leader for that year’s Horde Festival tour. Ghosty Head followed, a seminal Riki Lee Jones album, produced by Boston and Riki Lee Jones.

When Mike Bosley of Food Chain Records heard, ‘Girl’s Insane’, a song written by Boston and LA alternative singer songwriter Debbie Diamond, he signed them immediately under the name, The Januaries, who released their self-titled album on Food Chain in 2000. A 2014 article in ReBeat magazine called the Januaries the ‘greatest retro band that never was’.

For Rick Boston, making music is both privilege and art, and his ability to play, compose and produce for various styles and genres of music made him a natural fit in the world of feature and commercial film work, including credit on the music score for Ironman1 and 2, Roxanne , Anywhere but here, the Secretary , the Man from Elysian fields , Four Christmas’s , The vince Vaughn Wild West Comedy Show , Homefront..and many more using up too many words

John Nau, co-founder with Andrew Feltenstein of Beacon Street Music Studios in Venice, CA. was a band member with Rick in The Januaries, and after launching Beacon Street, Nau reached out and brought Rick on board as staff composer.

Currently, Rick Boston keeps a busy schedule. There are projects at Beacon Street and side-projects including The Shy Boys, with David Baerwald, formerly of David & David Another project is EDX: The Last Son Of Time, a multi-media concept album/TV drama with funky-drummer/producer, Andy Kravitz and LA songwriter Doug Lewis. Rick is also collaborating with Isaac Irvin and Michael Jost on their latest project Los Pochos.