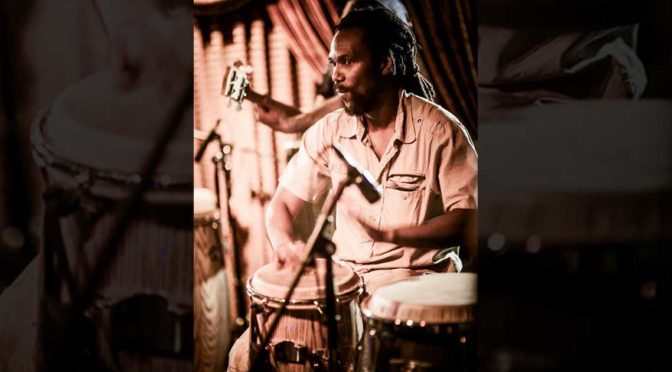 Marwan Mograbi is a Virtuoso Percussionist/ Drummer, African Storyteller, Educator and Dramatist. Born in Accra, Ghana. Marwan grew up in the traditional Ga and Ashanti cultures, where his love for music and his development as a drummer began.

“Hand drumming is my speciality but I play flutes and other instruments as well. My desire to drum started at a very young age. I always loved to sing and would hum or tap rhythms unconsciously. I have never stopped playing the drums ever since I first touched one.”

Other Drumming styles from West Africa have also played a huge role in his transformation and growth as a drummer.

Marwan graduated from the School of Performing Arts in Ghana and worked at the National Theater of Ghana as an Actor and musician. In Germany he created Tabasamu (a non-profit organization for African cultural performances). Over the years he has taught drumming and African music to hundreds of people – young and old, in Africa, Europe and the United States. Marwan has performed on numerous stages. The foundation and primary influences of his music are drawn from traditional Ghanaian and African folk music, even though other cultural traits are visible in his work.