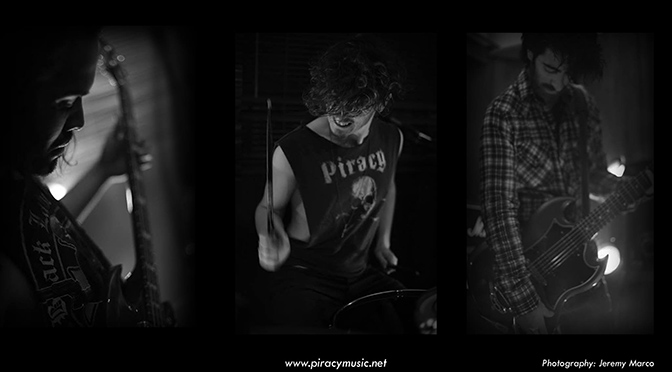 Piracy began their reign in the early 00s when Jace Mastel (guitars left), John Shippey (guitars right), Sky Stern (Drums), and Jaymz Harmon (bass) would ditch class to grab beers and jam in Stern’s cramped garage in Venice. After countless noise complaints, visits from the cops, and confiscation threats, Piracy decided to take the music from the garage to the stage.

Since then, Piracy has graced the stages of such venues as the Knitting Factory, Whisky a Go Go, Viper Room, Temple Bar, Air Conditioned Lounge, The Joint, The Good Hurt, etc. Besides rock clubs, Piracy often performs at backyard drinking fests, make-shift boardwalk stages, tiny pizza parlors, and makeshift art galleries. In fact, it has been said that they prefer these types of shows – closer with friends and fans.

Piracy currently consists of Sky Stern on drums, John Shippey on guitar, and old time friend and drinking buddy, Carrick Inzunza on bass. The Cream-y power trio are notorious for filling rooms with an incredible amount of decibels.

Sky, Kirk, and John are defying what contemporary rock music is all about. Their sound is unique, though some fans have noted influences from Sabbath, early Metallica and Maiden, King Crimson, and other genre pioneers of the latter 20th. Piracy is a thrilling new group with unheard-of material consisting of low-end fuzzy bass wah, deep brooding double bass drums, furious tom work, crispy cymbals, head nodding rides, and highly distorted on-the-brink-of-destroying-your-life guitar licks.