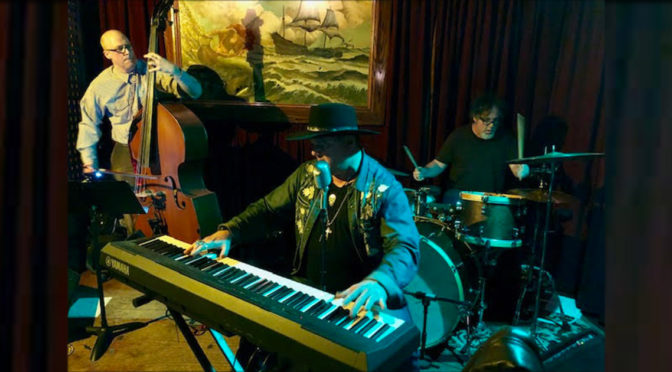 The Mike Livingston Band’s All-American musical throwdown is a wild amalgam of country, soul and rock & roll, all emphatically put across with Livingston’s frantic 88 keys and authoritative vocals and the coolly propulsive rhythm section of drummer Adam Steinberg and bassist Ben Getting.

Livingston, of course, is infamous for both his late 70s stint as lead guitarist for Masque-era punk originators the Mau Maus and his appearance in Richard Meltzer’s Vom movie before moving on to stints with his own powerhouse trio the Livingstons, a marvelous collaboration with 77 Skulls frontman’s the Billy Bones and the brilliant, resuscitated 66 Sunset Strip psych-pop sensations Yellow Payges.

Livingston returned to the piano first with The Livingston Band featuring Dave Provost a former musical compatriot in the Yellow Payges and Brian Irving and then later, Adam Steinberg gladly pitched in and in short order they drafted upright Bassist Ben Getting, The results were spectacular—a hard-driving, deep-grooving blast of honky tonk roadhouse boogie and savage punk & roll.