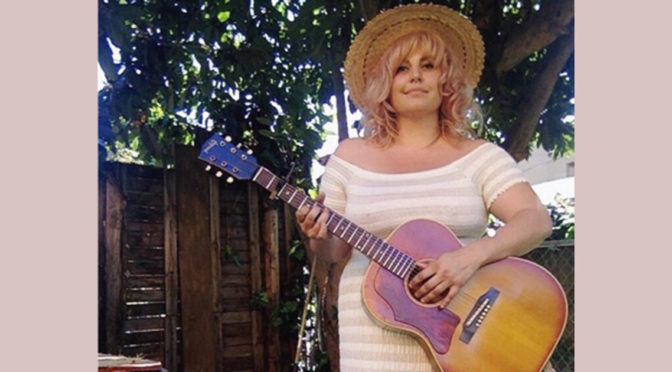 Ms. Lacey Kay Cowden was born just before midnight, on a sweltering Sunday in Lafayette, Louisiana. Her grandfather used to say, “A southerner has to have a little hell in their bones, to endure this kinda heat.” To hear her tell it, “There was nothing wilder, crazier or lovelier than my kin. All the stories, music, cooking and calamity that came from my upbringing has seeped into the deepest parts of me. When you know you’re cut from a cloth of extraordinary characters, tellers of tales, banterers, gamblers, music makers, and the biggest hearted folks, it was natural to set out and do exactly what I dreamed … and I dreamed in music. I wanted only to be a rambler, a lover, and a seeker of the gritty, shining places that inspire me to sing my own story.”

Cowden’s music is drenched in a southern brew, but she grew up to be a woman way out west. Every song and story reaches back through all the miles, over mountains and around coastal bends, back to her southern roots, but they carry the California breeze. Her lyrics traverse both unknown and familiar roads, her song, “Wild Wonder” is full of her admiration and appreciation for where she’s been … I was born in the world, wild and free, cut my teeth on the mountain and pulled by the rolling breeze. Nights lit by the fire flies. I was running through the dark, humming lullabies that rose like smoke from the sparks.

Los Angeles soon beckoned Cowden, where she fell in love with Venice, California. She took to life on a boat, guitar in one hand, vintage suitcase in the other, and soon enough, L.A. was looking like home. Love – and its songs – soon followed, and for Cowden, it’s all in the songs. She’ll sing, and you’ll hear that there’s no greater inspiration for her than love. Love for the mountains or the sea, a man or a woman, a stranger or a lifelong friend. They can love you, or they can break you in half … but that’s where the songs are.

In Venice, she met fellow musician/ producer, Matt Ellis, and soon discovered that they shared an affinity for boot tapping, knee slapping, folk/blues/roots music. Cowden and Ellis’s individual styles found a perfect bridging point, so they took to road and recorded Go Great Guns at Wave Lab Studios in Tucson, Arizona. The outcome was a heart-full, dusty 6 songs EP, including such signature Cowden songs as “Shotgun Lovin’”, “The Walking Song” and “Round and Round”.

Since then, Lacey has formed a band of amigos that includes Nick Luca (guitar), Jeff Smith (bass), and Dylan Grombacher (drums). They frequent the Southern California music scene and have an ongoing residency called “The Grand Ole Calamity” at Venice’s oldest bar/music venue, The Townhouse/Del Monte Speakeasy. The band is now gearing up to record their debut full- length album, followed by a late summer tour and a cavalcade of local L.A. shows. This is just the beginning of new adventures and the wildest of rides. Get on board!