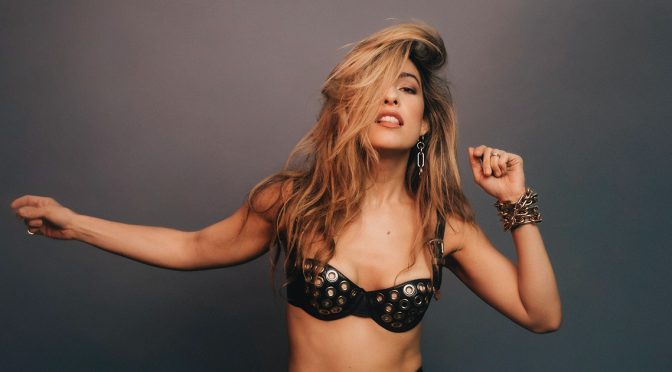 Even as millions of MishCatt’s fans around the world were dancing to “Another Dimension” and “Gun to the Head,” the streaming smashes from her 2016 debut album Highlighter, most were probably unaware of the fascinating neurological gift driving her multitude of sonic textures.

The Costa Rican born, Los Angeles based singer/songwriter – born Michelle Gonzalez – is blessed with synesthesia, a unique condition where when one sense is activated, another kicks in at the same time. When she hears music, she sees colors and shapes. Tying this into her foundational creative belief that “in life we all need different colors,” she launches a dynamic new phase of her ever-evolving career with her seductive, playfully infectious, reggae tinged new single that helps make us feel something we desperately need during this time when the world seems turned upside down: “Goofy.”

Over a lilting groove and lively horn-spiced flow, MishCatt – one of the tune’s co-writers and producers – sparks our collective romantic imagination and gets downright saucy and sensual with lines like “Wanna ride it like a Range Rover/Losing your mind/Losing composure. . .I get goofy every time I hear you say my name.” But she’s also taking this exuberant connection in a more serious direction: “If you want loving, put a ring on my finger…”

In addition to providing a sense of release and joyful escape, “Goofy” – due to drop July 31 – marks the launch of a powerful new creative partnership, and a new aesthetic moving forward, with the track’s co-writers and co-producers Carl Falk, Albin Nedler and DYO. Collectively, the Swedish based team of Falk and Nedler has written and produced songs for contemporary pop royalty, including Ariana Grande, Madonna, Avicii and Demi Lovato. Falk’s credits include One Direction, Ellie Goulding and Charlie Puth, while Nedler’s resume also lists Selena Gomez and Five Seconds of Summer. DYO is a British singer-songwriter whose #1 UK hits include “Heatwave” and “Oopsy Daisy” The music video for “Goofy” was helmed by renowned TV and documentary director Carla Dauden, with costume design by Karla Miranda, who has worked with Billie Eilish, Cardi B and The Weeknd.

“We started writing this song during the early stages of COVID-19, and I’m sure subconsciously we were trying to create a different kind of energy that would push the darker shades of reality aside for a more vibrant burst of hues,” MishCatt says. “I want to take people to a place in their mind that they love, a special getaway that can at least for a moment help them forget what’s happening. What I love about the song is that it’s the first track I’ve done in a long time that makes me want to put on my earphones and dance like crazy.

“Music is medicine,” she adds. “I think I needed something to make me feel sexy even in lockdown mode. I want to create more songs like this that are energetic and free-spirited, that can motivate people to feel free to do whatever they want to do. Plus, I’ve always loved reggae and pop and wanted a song that would mix both vibes. The island vibe is also a way to make a connection to my roots as a Latin American. Another fun fact: Because I had to get back to L.A. quickly from Sweden after the lockdown was announced, I wound up recording the vocals in my closet and sending them over digitally. I love the way they came out!”

Although Mishcatt’s tracks “Another Dimension” and “Gun To The Head” have over 17 million and 9.7 million streams, respectively, it was a cover she posted on Instagram of her singing the Cher/Nancy Sinatra 60’s classic “Bang Bang (My Baby Shot Me Down)” which initially attracted the attention of Carl Falk. Falk had worked extensively with the late Swedish DJ/artist/producer Avicii. Impressed by what he saw and heard, he invited MishCatt to perform Avicii’s song “Fades Away” at a tribute concert at Friends Arena in Stockholm. On a bill also featuring Aloe Blacc, David Guetta, Adam Lambert and Rita Ora, among many others, MishCatt gave an epic performance before an audience of 58,000. Billboard called the event “heartfelt and highly emotional.”

Prior to connecting with Falk and his team, MishCatt enjoyed her earlier musical successes – which culminated in the release earlier this year of her EP The Real Pavo – working with Swedish songwriter/producer Pontus “Avant” Winnberg, who as a member of the production duo Bloodshy & Avant, has produced everyone from Britney Spears and Madonna to J Lo, Christina Milian and Katy Perry. MishCatt met him through a family friend who had moved from her home country of Costa Rica and established key connections in the Swedish music industry. At the time, MishCatt was riding a wave of success as lead singer (singing in English) of the Costa Rican band Patterns, whose song “Sunny Days” had caught viral fire and also became popular in Mexico and the Dominican Republic.

“My friend asked if I wanted to go to Sweden and meet some producers she knew,” MishCatt says. “Having grown up a huge fan of groups like Ace of Base and so many of the tracks their producers had done for American artists, I made the hard decision to leave Patterns and take a huge chance. I’m very passionate about creating topline melodies. We vibed immediately and started writing the Highlighter album. I’ve always believed that the most important thing for artists is to be openminded and authentic to who you are at any given time. I had sung sexy 80’s dance pop with Patterns, and it made sense to extend that into the poppy synth dance sound on my first album.

“It was a great learning experience,” she adds. “I had gone to Sweden not knowing anyone, and working with Pontus was like going to a writing camp where I could get out of my comfort zone, open my mind to a new world that helped me grow and, most importantly, learn how to trust my gut. I feel like I’m in a different place now. I’m always going to be evolving, and part of that is not being afraid to change and explore different sounds during every phase of my career. The main thing is that everything I bring to the table is authentic.”

Currently, in addition to pursuing her pop career, MishCatt has been working with artists in the Latin music community in L.A. where she engages in her passion to create music for meditation and yoga and perform with a collective of artists known as Kosmik Band. Last December, the ensemble performed their reworked and improvised mantras at a big festival in India, including one at Ekam – The Oneness Temple. MishCatt says, “I just like to do different things in music, and it’s great to have a variety of colors in my palette.”

That multi-faceted artistry has its roots in a very musical childhood, where her parents encouraged her and her younger brother to be creative and do what they felt passionate about. Her father was a jazz pianist and commercial jingle writer, and she has fond memories growing up learning the ropes at his studio and in her teens joining him onstage and singing at his jazz gigs. While she was clearly influenced by his jazzier tastes, including artists like Nat “King” Cole and Ella Fitzgerald, MishCatt’s mom (also a singer and actress) imparted her obsession with 80’s pop music as well. MishCatt first discovered her own musical talent when she began imitating her favorite artists for her friends, high notes and all. She started writing songs at 12 and soon realized that her natural facility for languages translated to singing songs not only in English and her native Spanish, but also in French, Portuguese and Italian. Performing with her father, she also developed an immediate affinity for performing.

“My favorite aspect of being a songwriter and recording artist is that music has always felt like a beautiful playground for me,” MishCatt says. “I chose to do professionally in my life something that I have always loved to do since I was a little girl. Even when it feels a bit uncomfortable at first, I am always experimenting with new sounds, ideas, and yes, colors, because I never know what will surprise me next. I love putting myself in survival mode, because that’s when I am at my most creative. As my career develops, I want to connect in an even more real way and take the music to exciting new places. It’s more than just the music though. With every endeavor, I ask myself what’s behind it and why I am doing what I do, so that I can make more mindful decisions and become more empowered as an artist and person.