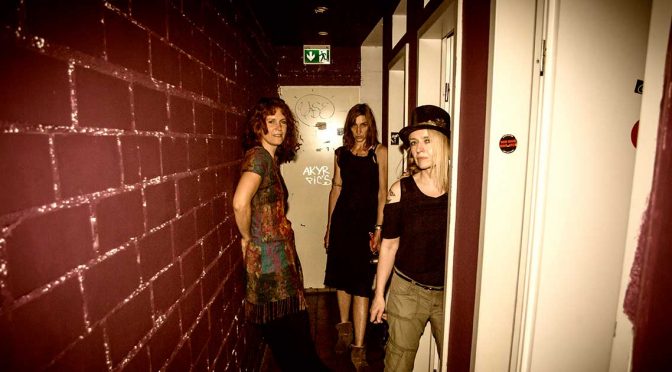 THE SLAGS have left their loudest days behind. After all, they have been unplugged for a few years. But they think that’s a good thing. And what does that mean? The three Frankfurt musicians radiate musical energy one way or another – with or without an amplifier. You can hear that in the songs of their new album BABYTREE. It is now their seventh studio work, a journey through the entire spectrum of the SLAGS universe. Poppy, punky, but also epic-loopy, bluesy, in a La-La-Land-style or deep inside – it shows all planets of the band’s own solar system. An acoustic journey of discovery, exciting to puzzle over who is actually doing what.

Actually, the ladies wanted to celebrate their 30th anniversary in 2020 – with film documentary, the new album, live concerts, festivals. Then, the virus intervened. So everything was quickly postponed to 2022 – new year, new game!

THE SLAGS have used the past twelve months to work on their rock’n’roll doc. Above all, this meant understanding memories, coping with them or rediscovering them in the first place. They viewed old videos, worked up basements full of material, got quotes from various companions, and developed storyboards. Lots to do under the radar. Lockdown time was used to compose, write and even play live in their own garden from time to time. In the end, eleven new songs were ready to be recorded and produced at the end of 2020 – again in collaboration with Oliver Rüger at the Bieber recording studio.

After three decades, THE SLAGS still consist of independent, expressive and strong characters, that work wonderfully even solo – each for herself. But they are always the strongest, when they join forces. For BABYTREE, the name of the game is diversity, versatility, and distinctness. Each of the three artists writes, composes and sings.

After thirty years, THE SLAGS have established themselves on the musical landscape – both as a band, and as individuals. With that confirmed, BABYTREE is their most mature and bold album to-date.

The Slags on Radio Venice