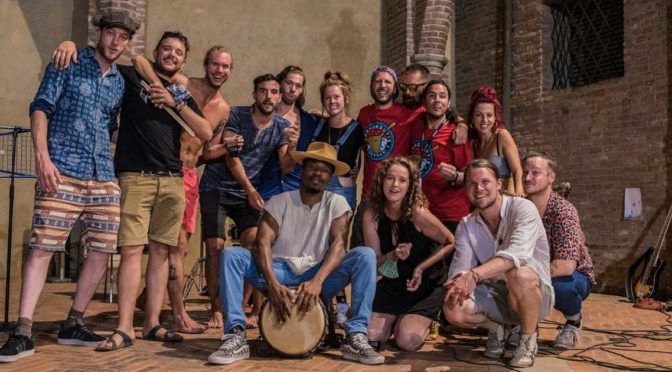 The emotional, pan-cultural music of the group, forms personal memories into a colorful melting pot of different traditions, touching on deep and complex stories of the human condition and social experiences. Having grown up in different countries with different traditions, they each bring a unique perspective to life and music that helps self-serve as a reminder that their brand of fusion can show a unity in diversity.

The Berlin based quartet is composed of violinist Bennet Cerven, guitarist Florian Eisenschmidt, percussionist Oliver Maguire and bassist Stefan Bielik. Hailing from different countries, each member of the group brings a different musical training and perspective to the band. Bennet, a classical trained violinist born in Chicago, began his violin playing at 4 years old. While he was performing in orchestras and winning prizes in soloist competitions, his love for hip-hop and alternative genres helped shape his mind as a composer.

An avid history lover and academic, Bennet first conceived the original compositions out of a desire to travel and a lust for adventure to far away lands. Oliver was born into a family of rock and roll. His father was the tour manager of Motorhead for many years and the late Phil Taylor began teaching Olly the drums from a young age. He grew up in a vary diverse area of west London, and was surrounded by friends who exposed him to the rhythmic styles of ethnic musicians from all over the world. Florian began learning the guitar in his early teenage years in Braunschweig, Germany. A love for classic rock and the contemporary indie bands of his youth urged him to express himself with his instrument. He has since been influenced by some of the best rhythmic guitarists the likes of Rodrigo y Gabriela, John Butler and Tommy Emanuel. Stefan first found himself with a bass in his hands at the age of 15 through the desire to form a band with his friends. Soon after, he began studying jazz bass at the Joseph Haydn conservatory in Eisenstadt, Austria. While jazz formed his skillset, it was his love for funk and rock that gave him his musical direction. For 2 years he was the primary bassist of Berlin-based Australian Rock band The Sunpilots and dedicated himself to a life of music. It is during their mutual time in Berlin that he met The Trouble Notes and his infectious energy and love for music made him a natural fit with the band.

Their music is characterised by emotionally driven, instrumental ballads reflecting pan-cultural influences and blending an eclectic fusion of traditions, to create a truly unique sound; representative of their extensive travels and consequent musical development. The group has achieved success and wide acclaim for past releases, with their previous EP Soundtracks from the Street reaching the Top 5 in USA iTunes charts for Latin & World Music. Videos of their performances have been viewed more than 100 million times on social media. They have scored multiple films including Als Paul über das Meer kam and Carracci: La Rivoluzione Silenziosa. They have performed live on Television in the United States and Canada, and radio formats in Germany, France and the United Kingdom. In 2019 they toured with Rodrigo y Gabriela, opening for them as a part of their European Mettavolution tour.

Everyone that joins the universe of The Trouble Notes remains a part of it, and often morph from a normal concertgoer into a true Troublemaker-sharing in the journey of the group. They pride themselves on their ability to use modern solutions to maintain a very real and humanistic way of life. Using a blend of digital platforms, they have built a world-wide audience by allowing intimate access into their lives and keeping a personal relationship with many of their fans. Their audience ultimately plays a role in the very creation of music by serving as cultural influencers and story-givers for their worldly compositions.

The Trouble Notes live a never-ending adventure traveling and telling the stories of people and places through their music.

For the Burning Man show, The Trouble Notes are joined by Sissos, Tribubu, Daiana Lou and Level Spaces.

The Trouble Notes on Radio Venice

One thought on “The Trouble Notes and Friends”