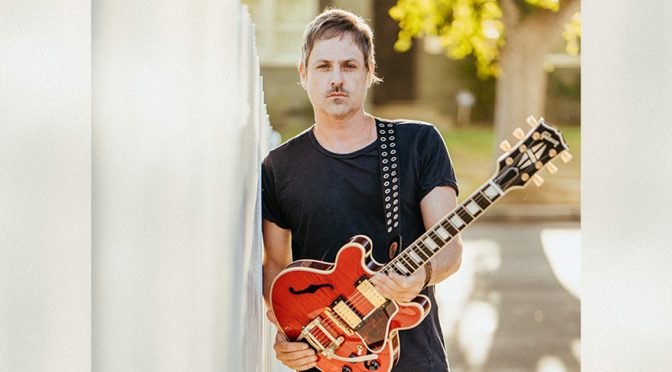 Guitarist, singer, songwriter and producer Rafael (pronounced Hafael) Moreira, began singing at age four and performing on the nylon string acoustic guitar at age six, taught by his mother, a music teacher, singer and songwriter in Brazil. With his first electric guitar at age eight, he formed a band with his two older brothers as the rhythm section and began performing live.

Rafael’s debut instrumental album Acid Guitar (an eclectic instrumental blend of Rock, Jazz and Brazilian music with vocal lines complimenting the song’s melodies and soulful, shredding guitar solos), was well ahead of its time, but the project established him with audiences worldwide as well as spotlighting him as a preeminent musician and relentless performer at concerts and clinics in the U.S., Singapore, Japan and Australia.

Rafael went on to front his own band, the rock trio Magnetico, releasing their debut album Songs About The World in 2008 and touring Europe, Asia, South America and the U.S. In 2015 Magnetico joined the KISS KRUISE V lineup, on the bill with KISS, Steel Panther, Lita Ford and The Dead Daisies.

In 2016, with a new lineup, Magnetico went on a U.S. tour supporting satirical hard rock sensation Steel Panther. On July 4, Magnetico had their biggest show yet, opening for KISS at the AVA Amphitheatre in Tucson, Arizona. In October 2016, after releasing their new full-length album Death Race, Magnetico joined heavy weight rock bands King’s X, Skid Row, Brad Whitford and KISS themselves for another set of shows at the KISS KRUISE VI. For KISS KRUISE VIII in 2018, Rafael and Magnetico were invited back to play alongside original KISS guitar royalty and original member Ace Frehley.

In 2018 Rafael conducted clinics in Tokyo and Osaka at the ESP Musical Academy, and EM&T Music School in San Paulo, Brazil. These Japanese clinics coincided with Rafael’s role as lead guitarist for Paul Stanley’s Soul Station, a 13-piece band performing a 12-show residency at Billboard Live in both cities. In California in 2017 and 2018, Rafael conducted two days of master classes at Citrus College in Azusa, CA.

As a house band member and featured lead guitarist, Rafael has commanded center stage on hit television shows American Idol seasons 13, 14 and the final season finale, 15 (2014, 2015 and 2016). In 2015, he was the house band guitar player for the remake of the classic game show To Tell the Truth on ABC hosted by Anthony Anderson. Also in 2015, Rafael was invited to perform on ABC’s Greatest Hits with emerging star Alessia Cara and legendary Poison vocalist, Brett Michaels. Rafael’s wailing guitar solos were seen and heard by millions of viewers on the NBC television vocal competition show The Voice on seasons three and four (2012 and 2013) and 2009’s Rock the Cradle on MTV.

Recognized for his electrifying guitar playing and stage performances, Rafael gained his broad fan base in the House Band for CBS’s Rock Star: INXS and Rock Star: Supernova. Appearing on the show catapulted Rafael into an online sensation, making him the talk of the day on show-related blogs worldwide as well as on-air mentions from the likes of Dave Navarro, who was quoted raving: “Rafael Moreira is one of the greatest guitar players in the world!”

With his undeniable television visibility and on camera experience, Rafael has performed on virtually every early, daytime and prime time talk and awards show in the U.S. plus major shows throughout Europe, Asia and Australia including the legendary Top of the Pops in the UK. Notable appearances include Saturday Night Live, The Late Show with David Letterman, Late Night with Conan O’Brien, The Tonight Show with Jay Leno, Jimmy Kimmel Live! The Latin Grammys, American Music Awards, VH-1 Divas, VH-1 En Vogue, MTV Music Awards, ALMA Awards and Good Morning America. Rafael also gained national attention for his performances on American Idol’s “Rock Week” 2009, and the 2009 ESPY Awards on ESPN (on slide guitar with Wyclef Jean).
In the summer of 2013, Rafael took the stage for his biggest gig yet: a solo performance of his own rock version of Beethoven’s Ninth Symphony for 70,000 live fans and over three hundred million viewers worldwide to open the Bridgestone Libertadores Cup final soccer match between Atletico Mineiro vs. Olimpia at Mineirao Stadium in Belo Horizonte, Minas Gerais, Brazil.

All of Rafael’s achievements contributed to his landing the cover of legendary publication Guitar Player Magazine online, as well as other magazine features around the world including twice appearing on the cover of Guitar Load – most recently in 2018 — with features in Guitar Class and Guitar Clinic. Rafael also joined other renowned guitarists Joe Satriani, Steve Luthaker and Richie Kotzen to judge the annual Guitar Player Magazine “Guitar Hero” Competition. In Brazil, his home state magazine, Circulando Aqui, placed him on the cover in 2018.

As a songwriter and producer, in addition to being behind the board for his own projects, Rafael has worked with many different artists like Ty Taylor (Vintage Trouble, CBS’s Rockstar), Scilla Siekmann (Eurovison finalist), co-writing and producing the band Thief in the Night’s debut EP Under the Influence, Lara Karuna and Keyrei. Rafael also has written music for TV shows such as the prime time series Cold Case, video games (Spawn), documentary and feature films, plus trailers for Hollywood blockbusters like Transformers: Dark of the Moon.