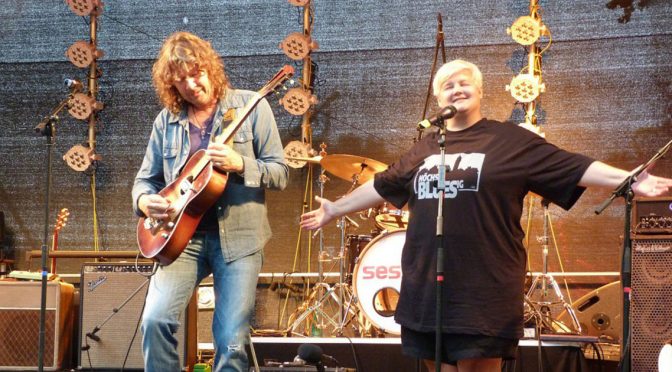 King Baumgardt is coming up on it’s 20th anniversary, more or less, who’s counting. They said they never could decide on a band name, but it was always clear that both their names had to be included. They make their home in Frankfurt, Germany. Frankfurt, not known for it’s great support of their local musicians, loves these two as their own sons and daughters.

Matthias Baumgardt, born and raised in Frankfurt’s East End, formed his first band at 14 and the neighbors looked on and grew up with him as he moulded Frankfurt’s live music scene until it fit him like a glove. He brought Rock, Rock‘n Roll and Blues to us and made them accessible, touchable, danceable and live-able! Music – as a way of life.

In 2000, April King wandered into the short-lived, but legendary Blues and Beyond in Frankfurt. At the end of the evening, Matthias asked her where she’d been all this time. Her answer was, “Waiting for you to finally show up, I guess”. April brings with her an authenticity and an unstoppable voice, she has been compared to everything from stardust to cinderblocks, you have to decide for yourself.

King Baumgardt is in the studio right now! Setting down the psychedelic stuff. It’s not clear, when this is all over, where we will be playing the big stuff. The people we pay our royalties to are sucking us dry and every time the city gentrifies a neighborhood we loose another Honky-Tonk to play in, now in the Corona aftermath, most of our venues won’t even open up again.