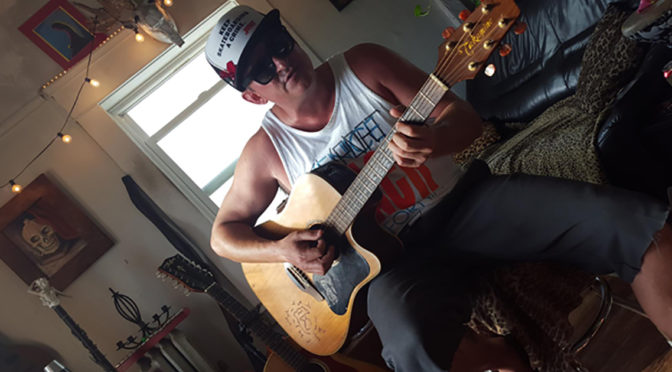 Jeremy Parker born in Upland California July 16 1975 grew up playing music and singing in church. His father was a pastor that led the worship on Sunday’s so Jeremy would often play guitar or drums and sing along with the church worship band. At age 14 he joined a Christian death metal band call Revelator. At age 16 he played in a high school party band called Entente.

He got a track n field scholarship pole vaulting at a Baptist College in Lynchburg VA called Liberty. Jeremy was a surf punk from Southern California and didn’t realize what he was getting into, so after being submerged in this ultra right wing culture he formed a counter culture punk band called Liberty Noise. They played all of the “forbidden” underground parties at Liberty that would’ve gotten everyone there expelled. Those were the best parties and it fueled a rebellious side of Jeremy just wanted to have fun and play music.

After 2 years in Virginia, Parker moved back to California and attended USC and then Cal Poly Pomona where he formed a 10 piece Ska band called “Skeeball”.

After college Jeremy met his life long friend Mike Sullivan (Sully) who together along with Jack Carlos formed the popular band “Meet Me at the Pub” in 1999. They would go on to travel the world and played shows from England to Japan and every backyard party in Venice Beach they could find.

It was in Venice after college that Jeremy found his voice and his sound. In 2016 Jeremy was made “King of Venice” at the annual Neptune festival in Venice Beach, a great honor given to one person every year who has made a positive impact in the Venice community.

He’s performed solo shows in England and Sweden and ran the popular “Acoustic Tuesday” night at the Venice Whaler.

In 2018 Jeremy moved to West Chester PA to work on television as a chef on QVC. He married Shannon McKernan in October 2020 who he met on a party bus at a Meet Me at the Pub show in 2016. She’s a local a Venice girl but claims she had never heard of Jeremy before they met which Jeremy finds hard to believe. Parker still has an apartment in Venice though he primarily presides on the east coast.

Virtual Tips for Jeremy Parker
In lieu of direct tips, Jeremy asks that you donate to Radio Venice instead (thanks Jeremy!)
PayPal.me/RadioVeniceTV